Is the American system democratic? 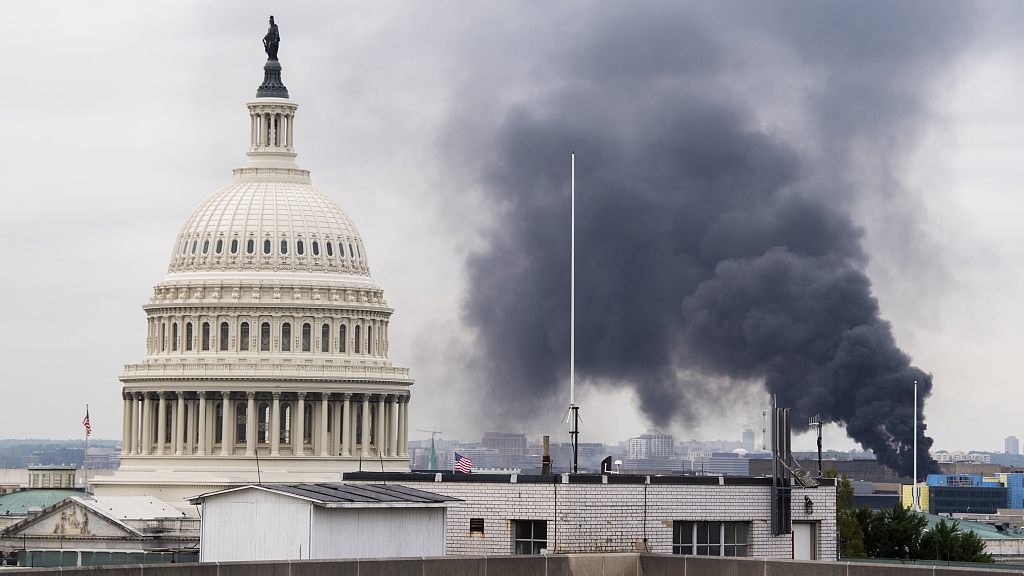 Smoke billowing from a fire on the roof of the new Metro office building in southwest D.C., is seen from Capitol Hill, September 16, 2021. /CFP

Editor’s note: Adham Sayed is an assistant professor and researcher at the China-Arab BRI Research Center at Zhejiang Gongshang University and the author of “This is How it was in Wuhan, Diaries of Quarantine Days.” The article reflects the author’s opinions, and not necessarily those of CGTN.
When U.S. President Joe Biden stood in front of his people and justified the disastrous withdrawal from Afghanistan, some believed that the United States had finally learned the lesson, and that, based on Biden’s speech, they would not get into a new war anytime soon. Biden proceeded to enumerate the human and financial losses, using these numbers to exaggerate his argument and show the necessity of that withdrawal.
However, rather quickly after that speech, only a few days after the withdrawal, the U.S. administration began working on and activating plans for new and more brutal wars. So the United States, Britain and Australia came together and announced a nuclear submarine deal aimed to pressure China and to eventually surrender to them.
The United States has one goal in mind that is dragging the human race towards a new cold war where it can suppress the development of China and every country aspiring to attain freedom and progress. We can see this classical aggressive approach of the United States in all aspects of international relations, starting from the new nuclear alliances, passing by the unjust economic sanctions and trade wars, and the misuse of the concept of national security to suppress the technological development of other countries, especially China.
One tool for this old game was the alleged Democracy Summit, which was held virtually at the invitation of U.S. President Biden about a month ago. It is a new, old method. Its public goal is to build an alliance that claims to be democratic and free, but inside closed doors, it is as tyrannical as it can be. However, this pathetic old game might be dangerous but it will not work this time.
The goal of the United States was to isolate China, as it once did with the Soviet Union. Well, it’s a hopeless try, especially when isolating China would be a catastrophic move for the global economy. We can refer to the debt crisis of only one company in China, which led to a state of panic in all financial markets in the world. So, what it would be like to isolate China?

“A nation who oppresses other nations cannot be free.” A country that oppresses other countries cannot be democratic. America cannot impose its model on us while we’re witnessing its destructive results everywhere it has landed.
On the contrary, peoples everywhere have the right to choose their own political systems that suit them best and express their own take on democracy. Let’s all agree that democracy is not an exclusive feature of the West, where governments are going through a crisis of trust, not only from the peoples of the world but from the Western peoples themselves.
If democracy is a means of governance in order to represent the interests of the people and thus build a better life for them, is this what the so-called American democracy produces? The so-called American democracy has protected racism and racial discrimination and it cannot be a democratic system. Blacks’ cries of “I can’t breathe” still resound in our ears to this day.
A system that produces very high inequality rates cannot be democratic. We still remember well the protests that took place in America under the title “Occupy,” holding the slogan “99 percent of the people against 1 percent of the rich.” And here comes the question, if American democracy is really the rule of the majority, who should it be serving? The majority, meaning the poor, the homeless and most of the people who are in need, or the 1 percent of the rich?
A system that allows someone like former U.S. president Donald Trump to reach the presidency after all the racism, hostility to science and backwardness he represents in every way he acts, is a system that needs a serious review.
The system that legalizes corruption under the names of “pressure groups” and “funding” cannot be democratic. And to prove this, it would be almost impossible to expect fair elections where everyone has the right to participate, to run for election and to vote freely while the money game dominates U.S. elections. Statistics indicate that the last presidential election cost $6.6 billion.
A government that spreads wars, destroys countries, and annihilates people under the pretext of spreading democracy, cannot be democratic.
Having said that, as the American system is far from perfect, instead of imposing it on the peoples of the world, it’s to everyone’s benefit to bury it and relieve the world from the tragedies it causes. Within the borders of America, it is a system of racism, inequality and oligarchy.
On the international level, however, it is a criminal and plundering imperialist government that thrives on the triad of war, sanctions and monopoly. It resembles the most criminal empires in history.

A real democratic system prioritizes the interests of the people, therefore, the name that we give to the system shouldn’t be a problem. So, when we talk about majority rule, the majority here is the people. Democracy is the trust that the people give to the government. This trust can be measured by several scales, but the main one is the people’s commitment to government plans in word and deed. 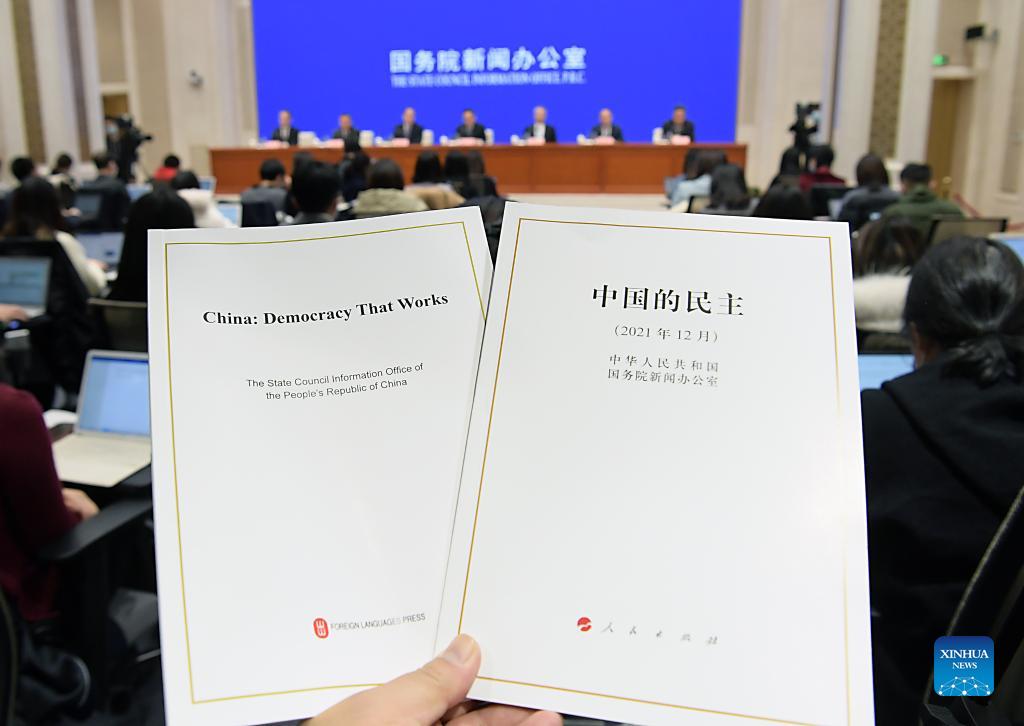 The Chinese and English editions of the white paper titled “China: Democracy That Works” are displayed at a press conference held by the State Council Information Office in Beijing, China, December 4, 2021. /Xinhua

Here are some quick areas to compare the Chinese model with others, away from Western ideological classifications of democracy:
The Chinese model has lifted more than 800 million people out of extreme poverty. In other words, the model was working in favor of these people; it has encouraged the country’s development and people’s welfare; it has been able to protect people’s lives.
During the pandemic period in China, the government acted based on the slogan “people’s lives first,” which contributed to controlling the spread of the virus in a record period. The people’s full commitment to government procedures was evidence of the great trust between the people and the state. It’s not necessarily the case in other countries.
The Chinese model has been able to breathe life into the slogan “a community with a shared destiny for mankind” and bring it to reality. In addition to the Belt and Road initiative based on mutual profit, we have witnessed the great international cooperation shown by China in order to control the pandemic, especially cooperation with Arab countries through the exchange of experiences and the export of vaccines, leading to the production of the Chinese vaccine in more than 18 developing countries.
Therefore, if a political system can be judged by the level of trust between the people and the government, we can pose the following question: do the American people trust their system and government? The same question can be asked about China.
Briefly, let’s consider the following, opinion polls have proven that the popularity of the U.S. president, a year after his election, has fallen back to 45 percent, and many other polls have also shown that the American people do not trust that during the election period, their government will fulfill the promises it made, while others consider that they do not trust the government because they believe that the elections were rigged.
In other polls conducted in preparation for the summit on democracy held at the invitation of President Biden, most young people in the United States considered that American democracy was either “in trouble” or “a failed democracy,” with only 7 percent considering it to be healthy.
What about China? On January 18, 2022, the 2022 Edelman Trust Barometer has shown that public trust in the Chinese government has risen to 91 percent, the highest in a decade. The result is based on a survey after polling over 36,000 people from different countries.
I believe that this trust is the main criterion for measuring democracy. And it is far more important than what Trump called “a forgery of the will of the people.”
CGTN